How We Spend Our Days: Sarah Stone

Annie Dillard wrote, “How we spend our days is, of course, how we spend our lives.” On the first of each month, Catching Days hosts a guest writer in the series, “How We Spend Our Days.” Today, please welcome writer SARAH STONE.

5:50 a.m. It’s Monday morning, and the first alarm goes off. The second alarm will go off at 6:00. I’m sleepy, and it’s dark out, but I feel happy. Ron and I sing morning prayers (basically the exact same Hebrew prayers sung by my ancestors on my mother’s side–not the socialist organizers, of course–but these prayers are just as new to me as to Ron, who comes from a family of two generations of Swedish-American Congregationalists and a couple of missionaries). Before we joined our shul and adopted this practice, I used to wake up brooding, but it’s hard to brood and sing at the same time.

At this point, my day is already not exactly like that of the ur-novelist I sometimes imagine. I don’t have a name for this guy, but I picture him as twenty-two, living in a fifth-floor walk-up in Hell’s Kitchen or Brooklyn. He doesn’t have a job but lives from odds and ends of temping and book reviews–or maybe he sometimes has a grant: he’s very promising, this kid! Maybe he works in a bookstore or as a barista. He hardly speaks to his family, he randomly hooks up with a series of girls or boys (this part’s a bit fuzzy and I don’t spend much time on it), and when he gets up in the morning, he doesn’t bother to shower or shave but just grabs a cup of coffee that’s been brewing overnight, takes out a box of leftover Chinese food from last night’s delivery, and sits down at his desk to begin writing. It’s a cool, foggy day there, and the cold light comes through his uncurtained, dirty windows, but he doesn’t notice because he is so absorbed in his work. He will write masterful prose for the next twelve hours, forgetting to eat lunch, neglecting email and phone calls, answerable to no one but his muse and her whip.

6:15 a.m. I go into my writing room and call out to Ron, “I’m turning on my computer. I’m turning on Freedom.” And he calls back (actually, our writing rooms are next to each other–we live in a little 1950’s California bungalow where no room is more than a twenty-two second walk from anywhere else), “I’m turning on Freedom too.” Just one small effort of will, a reminder that this time isn’t stolen from anyone else, that it’s okay to write. In our ideal days, we do not go online until very late morning (and not on weekends either). Because I find that once I’ve gone online, the morning is full of self-interruptions, with no clear space for doing my own writing before communicating with the world. All along the way, the phone and Internet sing their little just-for-a-moment siren songs. Like most writers, I have to find ways of chaining myself to the mast and closing my ears in order to get any writing done.

6:30 a.m.: I do just what I have promised myself not to. Before going to bed, as usual, I hid my phone in a Polish inlaid wooden box that belonged to my grandmother and then piled meditation books on top of it. (The theory, and sometimes practice, is that I would have to decide to get at it, and there’s just enough of a pause to break the automatic checking routines.) Now I dig into the box, pull out the phone, check FB and email to see what’s happening with the current family crisis, and then wind up reading news articles about war and electoral politics.

In one of my former lives (or, rather, an earlier moment in this one), I was a Foreign Service spouse. When I lived in Seoul, I entertained more or less graciously, went to ladies’ teas, and taught in the classroom and on South Korean public television. In Washington D.C., I did language and cultural studies and shadowed the young Foreign Service officers in their training. In Burundi, I taught ESL, worked as the Embassy’s community liaison officer, reported on human rights, and volunteered with orphan chimpanzees at the Jane Goodall Institute. If there were outbursts of violence, I stayed in the house but didn’t write. Actually, I stayed in the house anyway in the mornings, trying to figure out how to write a novel, beautifully supported by the occasional overseas friend or mentor, but still quite lost. I lived out in the world, and found it highly distracting.

At this point, decades after grad school and many years of writing and teaching, I live in the SF East Bay, and find it at least as distracting as the life I had overseas. The world now comes to me, enticingly, as I teach online and work with writers long-distance. Almost every day begins with the reminder to myself to work on my own writing before I go into the virtual classroom to teach or start responding to family and friends, shul and activist commitments. But on all too many days, I ignore my own reminders. Plus, and this is probably clear by now, it’s become harder and harder for me to put together a straightforward narrative.

Noon: By now, we’ve finished the Pilates/yoga routine that keeps our middle-aged backs and wrists working, run a couple of loads of laundry, gone for our morning walk, and responded to the current family emergency. I’ve worked on the commissioned piece I’ve spent the last few days on. I’ve sent out photographs of the climate march to the people who want or need them. I’ve answered urgent work emails and gotten in touch with a couple of pals from our Judaism for the Beginner’s Mind class to discuss where we’ll meet for dinner and our extra study session. We have visiting family in town and have ten or fifteen texts: first it appears that we will meet them in SF and go to Fisherman’s Wharf, and then it appears that today is off and we’ll be getting together on Friday instead.

Over lunch, Ron and I have our regular Monday business meeting where we check in about what we meant to write, read, do for work, and what’s actually happened in our life, for good and ill. The work we did, the beautiful teaching moments, the places where the family crises got out of hand. The weekend included a Ma’agal Tefillah Shabbat service at Chochmat Halev and that climate march in Oakland where we gave out pamphlets from Truth or Drought and walked with the Factory Farming Awareness Coalition and the rest of the sustainable agriculture people, though we kept finding ourselves happily intermingled with the anti-fracking, climate justice, interfaith peace fellowship, and carbon tax groups. We also note that Ron managed to do all six of his writing sessions, revised half of his new story, and did massive amounts of research (everything he writes involves massive amounts of research). And yesterday I finished the revision of the second novella in my current book. This morning I was going to get back to the third novella again, but somehow I never got started.

I am accidentally writing a trilogy of novels (the first a series of nine pieces, the second a set of linked novellas, the third with multiple viewpoints and an overarching plot line). They’re a kind of homage to, and argument with, Dante, in which three generations of an artistic family try to break free of various addictions, with a little help (and sometimes hindrance) from the occasional ghost or god (versions of some of its pieces show up as stories). I wrote numerous drafts of one of the books before I had any idea what I was doing at all. While I was going back and forth with that book, I kept sneaking away and writing pieces of something else, and before I knew it, that had turned into a different but connected book. And both books seemed to be in conversation with Dante. I don’t know why. I can’t imagine having the grand sense of mission that would be required to say, “I am now going to tackle Dante.” Way out of my weight class, but the mind does what it will, and those poems have a peculiar fascination for me, as for so many other people. Amazingly, I’ve finished one and two-thirds of these books: I have no idea how.

Because if I haven’t made space for writing by noon, the writing day is over. There’s a beautiful afternoon ahead, full of contact with the world and all the people I love: family, friends, neighbors, fellow congregants and activists, colleagues, students, former students, and clients. But I probably won’t write any fiction. To keep that writing space sacred, to disappear from the world, I have to not only hide or disable the technology in some way but firmly hold in mind my intention to put on my own oxygen mask first. (I’ve certainly read that habit can displace will when followed regularly.)

I think that most of us have to find ways to disconnect from real life if we’re to have any chance at all of sinking into our imaginary lives. And when we have a day like this one, the only thing we can do is to forgive ourselves, put our imagined ideal writer out of our head (doesn’t almost everyone, whether they admit it to themselves or not, have some version of this figure living in the mind’s attic?), and start over again clean the next day. Put the phone in the box. Disconnect the internet. Let the world wait for just a couple of hours and remind ourselves that it will still be there when we get back. 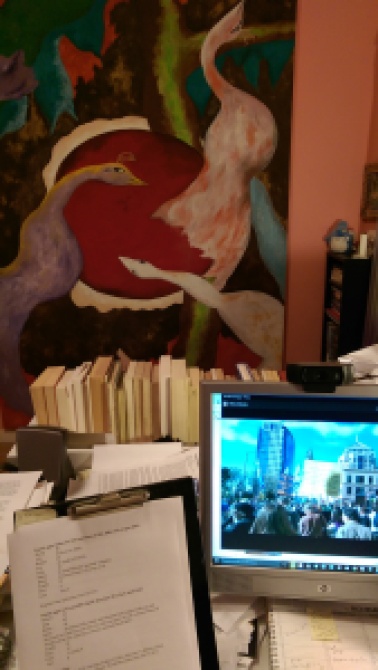 painting by the writer 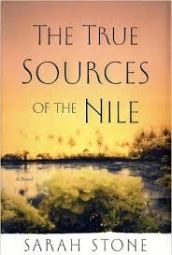 —Other Writers in the Series—