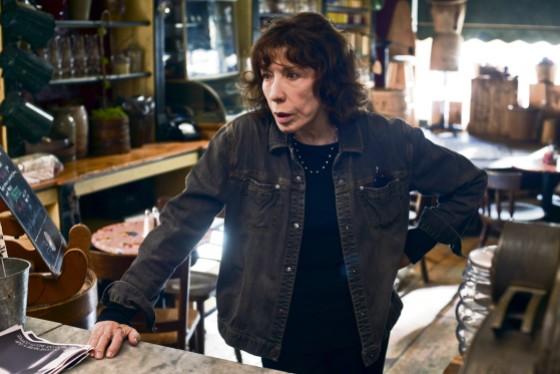 a scene from Grandma

75-year-old Lily Tomlin (who is now 76) gives a stellar performance in Grandma, and hats off to writer/director Paul Weitz for getting Grandma out of the kitchen, as well as for a terrific screenplay and story. And for his almost all-female cast. Weitz says he wrote the part of Grandma with Tomlin in mind. He talked to The Washington Post about the film:

“There’s something inherently youthful about somebody who has the guts to be themselves without becoming resentful or mean,” he says. “One thing early on I said to Lily is, ‘This is a movie about a woman in her 70s. There’s no deathbed scene.’ ”

A couple of Grandma’s best lines:

Love does not conquer all.

We need more films like Grandma–with lots of women in strong roles and with grandmothers who are poets and have first editions of The Feminine Mystique and who say what they think–grandmothers who look and act like Lily Tomlin who wears her own clothes in the movie. It feels cool to be a grandmother tonight.

365 true things about me
why this daily practice