How We Spend Our Days: Michael Martone

Annie Dillard wrote, “How we spend our days is, of course, how we spend our lives.” On the first of each month, Catching Days hosts a guest writer in the series, “How We Spend Our Days.” Today, please welcome writer Michael Martone:

It takes a whole day, thirteen, fourteen hours, to drive from Tuscaloosa, Alabama, to Fort Wayne, Indiana. The first hour of the trip is spent on I-20/59 and the last two hours on I-69 but most of the time, a good ten hours, will be spent on I-65. Not all of that is driving, of course. I take breaks, fill the tank twice. There is always road construction. In the last fifteen years, I have made this trip, maybe, forty times, not all of them round trips. Over the years, I have bought three cars in Indiana (Alabama has binding arbitration rules and no lemon law) and driven the highway one-way. I am from Fort Wayne, and my family lives there still. There have been birthday trips, hospitalizations, Thanksgivings, deaths. Six hundred and sixty miles, my door to my parents’ door, 480 of those on I-65.

The purpose of today’s drive is unlike any other. I am driving to Fort Wayne to see a play, Alive and Dead in Indiana. I didn’t write the play. Doug Long adapted my stories. The Fort Wayne Civic Theater is staging the play in its Playwright Festival, and my parents are excited as there are characters in the play named Michael Martone’s Mother and Michael Martone’s Father. Doug calls it a chamber theater piece. Not much narrative in the series of vignettes. The narrative point-of-view has pivoted to a character named Michael Martone who will do a lot of talking directly to the audience, an audience (if I make it) that will include me, Michael Martone.

Most of the vignettes, I will soon discover, have to do with cars and driving. James Dean in a car. Colonel Sanders touring. Building cars in Fort Wayne. The race at Indianapolis. I will be surprised that I have written so much on the subject. I guess I think about driving when I am driving. Or perhaps I think about thinking about driving when I am driving and then, later, I write about it.

But that is a ways away for now. I am traveling with my wife, Theresa, and my son, Nick. We are in a rental car, a gold Toyota Camry with 35,000 some miles.

You enter onto I-65 in downtown Birmingham at a place known as Malfunction Junction, the exit ramp from I-20/59 descending from overhead into the northbound passing lane of I-65 at a point where it leans into an ascending grade, the semis over your right shoulder down-shifting with laboring cars speeding by the stalling trucks into a truncated, quickly narrowing acceleration lane, attempting to merge into a three-laned occluded pack of very grumpy and territorially sensitive vehicles. Nick’s head is in the way. He is reading one of the George R.R. Martin books on his Kindle. It is at this moment too that the NPR station in Tuscaloosa gets swallowed up in distant wooded static, and Theresa seeks the burbling Birmingham feed. The highway is elevated here, the concrete flexing, booming at the seams, and here is the tail-end of the Appalachian chain, so we are climbing into some clear channel, green foothills all around, the statue of Vulcan on Red Mountain in the rearview, going 80 in a 65 mile per hour zone.

I-65 is an archipelago of such interchanges, three more islands in the chain—Nashville, Louisville, Indianapolis—each with its own multi-laned double-helixes, mutations of interchanges, beltways, loops, bypasses. Occasions of orchestrated panic—the slalom across six lanes in Nashville as I-24 unbraids from I-65, the hair-pin turn onto the bridge over the Ohio with the hilarious hieroglyphic warning diamond of a truck rolling over, the very unlucky cloverleaf on the south side of Prozac-enriched Indianapolis.

Kentucky seems close to triple-laneing its whole stretch of I-65. Over the years, I’ve crept through the cautious summers of construction there. Blast zones, disappearing shoulders, detours, paved and Jersey-bermed medium strips. This trip, there is work around the Cave and the Lincoln Birthplace exits near where the giant T-Rex points, with its tiny hands, to the sign that says I have missed Dinosaur World.

I was writing about grooves and thinking about the grooved roadbed, the endless corduroy fabric of it on the three lanes slouching into Louisville, micro-gutters to squeegee the rainwater away and, when dry, set up, at a certain speed, a humming harmonic of Radiohead on the radio.

We packed no snacks in order to force ourselves to stop every couple of hours. At Athens, a Starbucks. In winter, I’d get a hot chocolate, but instead, I grab a can of Sun Drop, my current preferred caffeine delivery device. Theresa ratchets around the iPod. We have been listening to Fresh Air podcasts, interviews with the casts of Porgy and Bess and the writers of The Book of Mormon. Sendak, recently dead. Terry mashes up all the interviews with him. He stopped signing his books for children, he says, because it was a terrifying experience for children—this strange stranger marking up a book your parents told you you can’t write in.

We rush through the haze of electro-magnetic soup we live in—cell towers everywhere. On the previous trip, a call caught up to us informing me that, Janine, my high school girlfriend, had died. I spent the long cedar-lined trip through southern Tennessee, detailing to Nick, in high school then, my own high-school journey. That, too, took place in cars, driving. Field trips, speech meets, mindless cruising, dating, driving into drive-ins.

So many days in automobiles. I move through the familiar, the bland, the planned and maintained corridors of normal. Interstated. Innerstated. Sated. Here is what I look forward to as I  I-65:

The railroad siding near Vinemont, Alabama, seen from an overpass, where a little pusher locomotive rests waiting to help the next freight train over Sand Mountain.

The racking and walking horse signs.

The spire of the Corvette Museum and the pilgrimage of Stingrays on the road. This trip I count five.

How soon it is, once in Indiana, for John Mellencamp to sing on the radio.

That massive yard of lawn ornaments for sale where I always say to myself I have to stop there on the way back.

Some–but not all–of the books by Michael Martone: 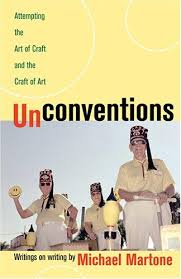 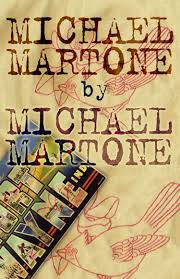