Roswell, Georgia, a small city rich in history on the north side of Atlanta, chose Robin Oliveira’s first novel, My Name is Mary Sutter, as their Sixth Annual Roswell Reads Selection. At a reception for Robin Friday night, which included delicious gluten-free cupcakes and lots of conversation about reading, committee members told me they had wanted to choose a book by a woman and also one that touched on the Civil War, this year being the 150th anniversary of its beginning.

The read began in February and all sort of events took place around it, including civil war reenactments, “Follow Your Dream” photography contests, and weekend discussions. Previous selections included Kim Edwards’ The Memory Keeper’s Daughter and Terry Kay’s The Valley of Light. 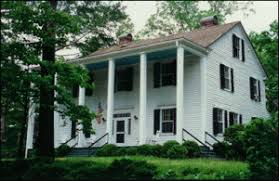 The Archibald Smith Plantation, the location of the reception, was built around 1845 and is in wonderful condition, the rooms filled with Civil War trunks, slave-made baskets, corn-husk dolls, and two of the first TVs. And more… Apparently there is some value in never getting rid of anything. When the last of the family members died, the house was bequeathed to the housekeeper, Mamie Cotton, who lived in it until she died. True to the period, I had to go outside to the bathroom.

At her talk at a Literary Luncheon on Saturday to over a hundred people, Robin received a standing ovation.